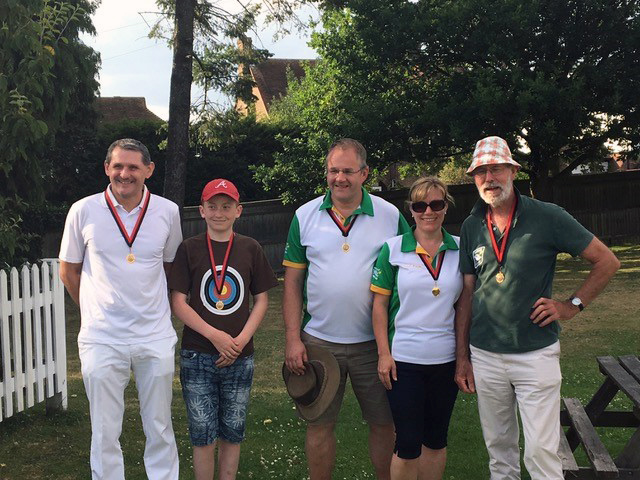 The latest Club Tournament Calendar can be found here

After much discussion amongst the committee we had decided to combine this shoot with a second trial shoot of the Pope and Young that we are hosting on 8th October. Our first effort had thrown up several unresolved issues that we needed to resolve before we could open it to the general toxophiliacs.

Although we didn’t end up with quite as many archers as I had hoped, we went ahead with the shoot.

The weather was about perfect and 13 willing (eventually) participants meant we could get three details of four, four and five. Nick turned up not expecting to shoot and was cajoled into having a go with a longbow….. Then Paul arrived after we had started, but joined in after the first round, with great effect…

I won’t go into the details of the shoot, far too complicated, suffice it to say, we very quickly picked up the method, and the shoot romped along at a cracking pace. We started at 10.00 and were finishing almost on the dot of 12.00 having got through 60 arrows a piece. Mind you, we were trying to shoot an arrow every 4 seconds at the last session.

It was such a delight and surprise to receive so many positive comments after we had finished. The general consensus was, it was FUN. I think everybody enjoyed themselves and the results, such as they were, seemed to be of little interest. Having said that the full results are below.

Many thanks to the lovely Jo, who, once again, acted as timekeeper and scorer, (and Lady P).

We did resolve the issues and are confident the Open version of this shoot will be as much a success as this one was. Please spread the word to any fellow archer you might meet on your travels, and please also let me or Val know if you’d like to shoot on the 8th October. Bear in mind we have only 30 places and visitors will take priority. Remember too, we will need a field party of about 8 for the open shoot, so volunteers needed.